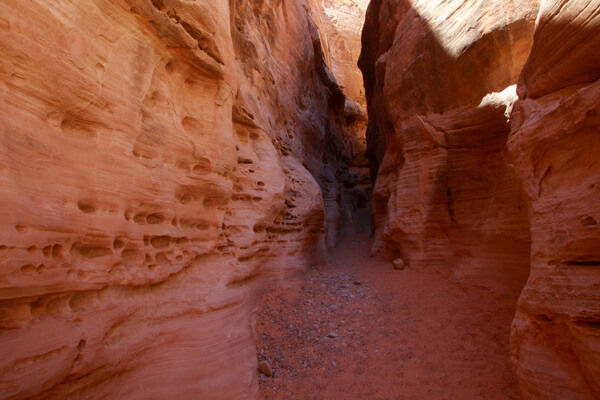 HISTORY: The Valley of Fire State Park is Nevada’s oldest, and largest, State Park. It was dedicated in 1935 and covers 34,880 acres. Why is it named the Valley of Fire? Once you see it, or see photos, you’ll have your answer! The Red Sandstone Formations were created during the age of dinosaurs, 150 million years ago, from sand dunes that shifted. This shifting, along with lots of erosion combined with uplifting and faults, created the uniquely shaped formations that make up the Valley of Fire State Park. Many of the rock formations also include limestone, shale, and conglomerates. When the sun is reflecting at the right angle, the formations appear to be on fire!

OCCUPATION: It is estimated that the park was used by people from about 300 B.C. to about 1150 A.D, first by the Basket Maker People and later by the Anasazi Pueblo Farmers who lived in the nearby Moapa Valley, a fertile land because of the existence of the Muddy River. It is assumed that the visits were for food gathering, hunting, and religious ceremonies. It is doubtful that any of these early people lived for any length of time in the Valley of Fire, because of the lack of water. They definitely stayed long enough to leave behind awesome petroglyphs, the rock art on the canyon walls. These drawings are visible at several locations within the park, keep reading to find the best places to view them. It is VERY important to NOT touch the petroglyphs, as even the small amount of oils from your hand can be incredibly damaging.

CLIMATE: The best times to visit the Valley of Fire?? ANYTIME!! Seriously, although the summer daily highs can exceed 100 degrees (120 even!), if you visit early in the morning before the sun gets too high, it’s not unbearable. The middle of the day? Go to Lake Mead during the hottest part! Spring and Fall are great, with comfortable temperatures during the day ranging from 70-85 degrees, depending on when you visit. Click here to get detailed information on the Average Temperatures by Month for the Valley of Fire State Park from weather.com.

PLANTS AND ANIMALS: The desert plant life in the area is abundant, with creosote bush, burro bush, and brillte bush. The variety of cactus species include beaver tail and cholla make for great pictures, especially when the flowering begins in the spring. The roads in the spring are awash with color from the Desert Marigolds, Indigo Bush and Desert Mallow.

Although there are plenty of animals in the Valley of Fire, many are nocturnal and not seen by the majority of visitors. Be on the lookout for many different kinds of lizards and snakes; and if you’re really lucky, you might spy Big Horn Sheep, Coyotes, Kit Foxes, Spotted Skunks, Black Tailed Jack Rabbits, and Antelope Ground Squirrels. Resident birds include the raven, house finch, sage sparrow, and roadrunner. Many migrant birds also pass through the park.

If you’re EXTREMELY lucky, you might see a Desert Tortoise. If you do, take care not to disturb it in any way: don’t try to touch it or get close to it.Why? I got this information from desertmuseum.org: “Unlike us, a desert tortoise can reabsorb moisture from its bladder; in effect, it carries a built-in canteen. If you pick up a wild tortoise, the frightened reptile is likely to dump its water supply–a minor nuisance for you, but a major problem for the tortoise, which in a severe drought could die before the next rainstorm allows it to refill!”

Visitor’s Center: The visitor center provides exhibits on the geology, ecology, prehistory, and history of the park and the nearby region. It is strongly recommended that each visitor make this an early stop after entering the park. Postcards, books, and film are on sale for your convenience. Open daily, 8:30 a.m. to 4:30 p.m. There is a brand new Gift Store inside the Visitor’s Center that just opened in November 2011, so be sure to check out the new items!

Picnic Sites: There are picnic areas with shade and restroom located at Atlatl Rock, the Cabins, Seven Sisters, White Dome, and near Mouse’s Tank Trail Head.

PETROGLYPH TRAIL: This interpretive Trail begins just north of the Visitor’s Center, is 1/2 mile long, and follows some of the best petroglyphs available in the Valley of Fire. This is an easy hike along a sandy trail. It is VERY important that you do NOT touch the petroglyphs, as they can be easily damaged and history of this sort can’t simply be repaired or replaced. Although nobody can say for certain what the petroglyphs mean, there is a sign at the beginning of the trail that explains the most commonly accepted meanings. The trail ends at Mouse’s Tank.

MOUSES TANK: The Mouse’s Tank in the Valley of Fire State Park derive’s it’s name from the legend of a an alleged outlaw Indian named “Little Mouse”. The legend tells that he was wanted for murder and hid out in Mouse’s Tank in the 1890’s. There are a few versions of the legend, and a few rebuttals, you can read more about it by clicking here. Mouse’s Tank is reached via a half mile trail from the parking area. It is a natural depression in the sandstone and after rainfall, water collects here. Because it is mostly shaded, the water sometimes remains for months.

ATLATL ROCK: An Atlatl was the predecessor to the bow and arrow, and this area has some amazing examples of petrogyphs. It is located near the West Entrance of the Valley of Fire State Park, and to view the petroglpyhs, you climb a staircas that is approximately 40 feet high.There is a campground located at Atlatl Rock and it has 44 campsites as well as several new RV Hookups with Power and Water. There is a modern restroom and shower building, and each campsite comes with shaded tables and BBQ Grills. Please see Fee information in the Visiting the Park Sectin for additional fees for camping.

BEHIVES: The Beehives rock formations are an impressive example of the forces of nature. The swirling patterns carved into the rocks created what can only be described as giant stone beehives.

ELEPHANT ROCK: This amazing rock formation in the Valley of Fire State Park has been described as looking like an ancient mammoth! This formation is just one of the many different and uniquely shaped formations that can be viewed throughout the park. Elephant Rock is located right on the main road in the Valley of Fire, near the East Entrance. Parking is prohibited there, but you can park at the East Entrance parking lot and take a short 1/3 mile hike to get up close.

WHITE DOME TRAIL: This easy, 1 1/4 mile trail is one of the best in the park. Not only does it offer incredible views of the colorful rock formations,it also contains some movie history!.’The Professionals’ starring Burt Lancaster and Lee Marvin was filmed here in 1935. The film crew left behind one of the props, a wall from the cantina set, and it still has the bullet holes! There is also a sign that tells about the different movies that have been filmed in the region. Walking on this trail will lead you to an incredible slot canyon-75 feet hight and 17″ wide at its narrowest point. The twists and turns in this canyon cause you to not be able to see the entrance and exit at the same time.

CLARK MEMORIAL: There is a commemorative White Cross in the Valley of Fire on the South Side of State Route 169, placed to honor the memory of John J. Clark. He was a retired 45th New York Infantry Volunteer, 67 years old, who died at the spot on July 15, 1915.Captain Clark was driving through the area in a buckboard, with his horse tied to the buckboard, and he died..most likely in seach of water.

SEVEN SISTERS: The Seven Sisters in Valley of Fire State Park is a collection of 7 uniquely shaped rock formations with a stark desert backdrop that makes a great background for photos. There is a picnic area at the Seven Sisters location with Picnic Tables, Shaded areas, and restrooms.

THE CABINS: There are 2 Rock Cabins in the Valley of Fire State Park, built by the Civilian Conservation Corps in the 1930’s. The Cabins were built using native sandstone, and they were built to shelter weary travelers. GREAT picture taking spot.

PETRIFIED LOGS: There are petrified logs here, evidence that the Valley of Fire State Park was once a forested area. The logs are located behind a fence in order to preserve them from vandalism. They were washed into this area approximately 225 million years ago, and there are two trails with interpretive signs leading up to them.
Directions

The Valley of Fire State Park is located off Interstate 15 between Las Vegas and Mesquite, NV. There are 2 entrances to the park and a few ways to get to each of those.

The West Entrance Directions are best for those travelling NORTH on Interstate 15 from Las Vegas.

If you are travelling SOUTH from Mesquite or points north, you may follow the directions above OR go to the East Entrance after going through Moapa Valley.

The East Entrance to the Valley of Fire State Park is located off State Route 169, 8 miles south of the town of Overton and 1/4 mile north of Overton Beach Marina.

If you choose to go through Moapa Valley, take Exit #93 off Interstate 15 and head south on 169/Moapa Valley Blvd. You will pass through the towns of Logandale and Overton in Moapa Valley. Approximately 8 miles after leaving Overton you will come to the Entrance Road to the Valley of Fire on your right.